Income poverty in the EU

The aim of this Brief is to analyse the level of poverty and the trends of poverty across the European Union. The rate of poverty varies between 9% and 26% across EU Member States. As the generally accepted EU definition of poverty is based on national standards, people can be poor with rather different incomes in various countries. We show the different monetary values of the poverty threshold across countries. We find that poverty is deeper in countries with higher rates of poverty, in other words, the poor tend to have lower incomes compared to the poverty threshold value. In the period between 2004 and 2007, overall poverty has declined in Ireland, Poland, and Slovakia. In contrast, at-risk-of-poverty rates have increased in Germany, Finland, Latvia, and Sweden. In the majority of countries there has been no statistically significant change in the at-risk-of-poverty rate over the past 4 years. We explored the robustness of our results by the estimation of confidence intervals for the poverty rates, and the use of alternative threshold values. 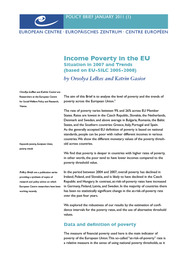 Income Poverty in the EU