This book reports on the findings of an empirical study on the situation of drug users, their consumption patterns and drug spending for the five most common illegal drugs, i.e. heroin, cocaine, amphetamines, ecstasy and cannabis.

The research is based on a newly created detailed survey instrument that was developed for the United Nations Office for Drugs and Crime (UNODC). A state-of-the art review from additional sources complements this comparison of the drug situation in six European cities, which represent a wide range of drug problems and public policies. The cities studied are from West to East: London, Amsterdam, Turin, Prague, Vienna and Warsaw.

Per capita consumption and prices were assessed by face-to-face interviews with 100 frequent consumers of heroin, cocaine and amphetamines per city (so-called “marginalized drug users”) and 100 occasional consumers of cannabis, ecstasy, amphetamines and cocaine (so-called “socially integrated drug users”), including questions on the range of drugs and the drug combinations consumed, on the mode of consumption and on expenditures.

In order to select “typical” interview partners and to judge their responses, “thick city reports” on the respective local drug situation were compiled, beside epidemiological and other scientific studies based on expert interviews with up to 20 drug policy actors. 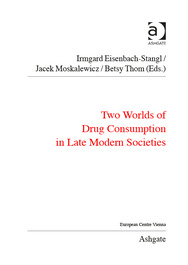