Europeans belong to the largest consumers of illicit drugs, absorbing about one fifth of the global heroin, cocaine and cannabis supply, as well as one third of ecstasy production (UNODC World Drug report, 2008). However, the vast majority of Europeans have never tried any illicit substance. In popular perception, illicit drugs still represent alien cultures challenging traditional European patterns, including consumption of our favourite drugs – alcoholic beverages. Illicit drug-taking, no matter what type of drug and its amount, is considered an evil in itself; it is regarded as a serious transgression of social norms. This perception is perpetuated and reinforced by legal norms which – in most European countries – penalize a wide range of behaviours associated with illicit drugs. As a rule, this includes the possession and consumption of illegal drugs. Parallel to that, most European countries have established extended drug services dealing with drug-related problems in a more assimilative way.

A crucial issue has been how many people transgress social and legal norms. Therefore, the general public, policy-makers, politicians and drug professionals alike demand, first of all, information on the prevalence of drug consumption. The question of what and how much they consume seems to be almost irrelevant. Only a few years ago the Global Workshop on Drug information systems (2002) identified the need for improved methods of estimating the quantities of illicit drugs consumed by users to complement the increasing sophistication and reliability of data on drug production and on drug seizure. Another important gap in the literature is the absence of reliable information on the costs of drug consumption at individual level. This knowledge is crucial to understanding the economic (and criminal) behaviour of individual consumers which includes not only drug purchasing but also continuous efforts to generate money to buy drugs.

To fill these knowledge gaps, a project was carried out by the European Centre in collaboration with UNODC and financed by the Austrian federal ministry of European and international affairs. The European monitoring Centre for Drugs and Drug addiction acted as observer. The overall goal of the project was to contribute to the development of useful and appropriate models of estimating drug consumption. The objectives were to assess consumption patterns of five main drugs – heroin, cocaine, amphetamines, ecstasy, cannabis – including the amounts consumed, and to assess consumption costs for each of the drugs. The study was based on data gathered from two different samples of drug users in six cities in six European union countries. 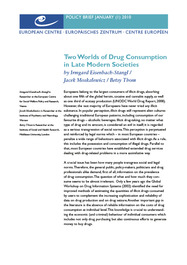