Multi-city study on quantities and financing of illicit drug consumption

Commissioned by the United Nations Office on Drugs and Crime (UNODC), the European Centre for Social Welfare Policy and Research carries out a research project to examine the per capita consumption of selected illegal substances - heroin, cocaine, amphetamines, ecstasy and cannabis - as well as the expenses for drug consumption on the consumer side. The fieldwork comprises 200 face-to-face interviews with consumers of the abovementioned substances. This pioneering study represents an important building block for UNODC's aim of estimating the dimension of illegal drug markets. Its duration will be two years and it will be conducted in six European cities: Amsterdam, London, Prague, Turin, Warsaw and Vienna. The project is funded by the Austrian Federal Ministry for Foreign Affairs. 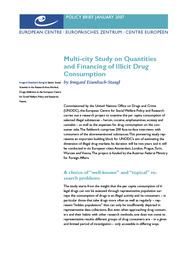