Income poverty and social exclusion in the EU

The aim of this Brief is to estimate the degree of social exclusion at EU level, and to identify the country clusters related to this, and also to present the level and the trend of poverty on a country level.

According to Europe2020 targets, the risk of exclusion is to be measured by three indicators: at-risk-of-poverty, severe material deprivation, and living in households with very low work intensity. The EU-SILC for 2009 suggests that overall 113 million people in the EU are at risk of exclusion according to at least one of these indicators. Some 6.5 million people are deprived according to all three indicators. On this basis, only a minority, therefore, can be defined as suffering from severe cumulative disadvantage.

We explored the natural grouping of the three indicators of social exclusion at a country level across the EU. At a larger level, we find a cluster of six East-European countries (Hungary, Poland, Lithuania, Latvia, Bulgaria and Romania) and the rest of the EU. On a more detailed level, we can identify four country groups.

The at-risk-of-poverty rate varies between 9% and 26% across EU Member States. We find that the poverty gap is larger in countries with higher rates of poverty. Between 2004 and 2008, the proportion of population at-risk-of-poverty declined in the Czech Republic, Ireland, Poland, and Slovakia. In contrast, the proportion at-risk-of-poverty increased in Denmark, Finland, Germany, Latvia, Luxembourg, and Sweden. We explored the robustness of our results by the estimation of confidence intervals for the poverty rates, and the use of alternative threshold values. 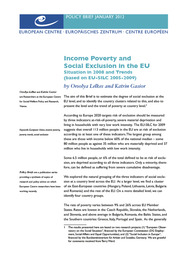 Income Poverty and Social Exclusion in the EU