Zaidi, A. (2015). Active Ageing Index: A Legacy of the European Year 2012 for Active Ageing and Solidarity between Generations. Policy Brief 4/2015. Vienna: European Centre.

A key positive aspect of population ageing is that the new generations of older populations are a resource to the societies they live in. Being healthier as a group, we have the potential in our old age to contribute towards not just our own well-being but also help sustain a rising economic and social prosperity for our nations. There are also higher aspirations among the new generations of older people, for example for independent living with the help of better and more comprehensive pensions, health and social care provisions as well as age-friendly communities. These new paradigms of active and healthy ageing motivate the work of the Active Ageing Index project.

The Active Ageing Index (AAI) has been developed for the EU countries during 2012, the European Year of Active Ageing and Solidarity between Generations. The work was initiated at the European Centre, and its second phase is currently undertaken at the Centre for Research on Ageing, University of Southampton. The European Commission with the support of the UNECE funds the AAI project, whose work benefitted from the advice of the AAI international Expert Group, comprising academics, statisticians and representatives of national governments and international organisations.

This Policy Brief summarises the results of the latest 2014 AAI for the 28 EU countries. The in-depth analysis of the constituent parts of the AAI (its 22 indicators in four domains) helps to explore what forms of active ageing potentials of older people have yet to be realised in different countries. With results now available for three data points, the AAI has started to facilitate the benchmarking of country performances, to encourage countries to look at policies and programmes that other countries have adopted and learn from those experiences.

Looking at the trends between the 2010 AAI (year: 2008) and the 2014 AAI (year: 2012), an increase of 2 points is recorded on average in the EU28. This improvement is quite remarkable given the economic crisis and fiscal austerity measures observed during this period. Overall, it is safe to assume that some progress has been made with regard to active ageing over this period, and further progress can be expected once economic and budgetary conditions have returned to normal. It is unclear though how much of the progress observed is attributable to policy changes, how much is the result of past policy choices and how much is simply the result of data inconsistencies. Further in-depth analysis is required to draw further policy insights from these results. 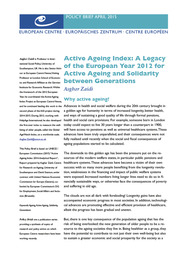