Poverty and social exclusion of migrants in the European Union

The Policy Brief analyses the occurrence of risk-of-poverty and social exclusion among the migrant population, and the trends in poverty rates between 2004 and 2007 based on the EU-SILC survey. The results include various tests of reliability, including the estimation of confidence intervals for the poverty estimates, and the use of alternative definitions of migrants.

Migrants from outside the European Union are occasionally exposed to a multiple times higher risk of poverty than the "indigenous" population. EU and non-EU migrants constitute two rather distinct groups in most countries in terms of their exposure to poverty.

We also explore the measure of social exclusion as defined in the EU2020 Strategy, including an analysis of the overlap between the measures of poverty, deprivation and low work intensity. Migrants are more likely to be socially excluded than the local population. Altogether, however, cumulative disadvantage (being at risk of poverty, suffering from severe material deprivation and living in households with very low work intensity) affects only about 1-2% of the migrant population, a number of 62 thousand EU migrants, and 518 thousand non-EU migrants. 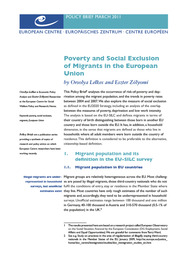 PB Poverty and Social Exclusion of Migrants in the European Union