The rate of poverty varies between 10% and 23% in the countries of the European Union. Low levels of poverty characterize the Scandinavian countries, the so-called Corporatist countries (Austria, Germany), and the Czech Republic, Slovakia and Slovenia among the former Socialist countries. In contrast, the risk of poverty tends to be relatively high in the Mediterranean and the Baltic states. This Policy brief discusses the sensitivity of these estimates to the measures used and explores the underlying patterns across the vulnerable groups and the likely causes of poverty in these countries.

The results presented are part of a long-term research project completed within the European Observatory on the social situation, financed by the European Commission. 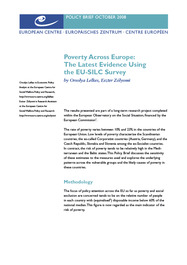