Transition from work to retirement in the Czech Republic and Slovakia

The present bolicy brief reports differences in the participation of the elderly in the labour markets of two new Member States of the European Union - the Czech Republic and Slovakia. The comparative analysis is all the more interesting because after the division of Czechoslovakia in 1993, the evolution of elderly employment and the choice of measures have been different in these countries.

Whereas in Slovakia the indicators of employment and productivity have gained as a consequence of pension system and ALMP changes, in the Czech Republic we see not only a raising number of elderly employed persons, but also some other consequences from more than ten years of reform: for example - people leaving the labour market too early. 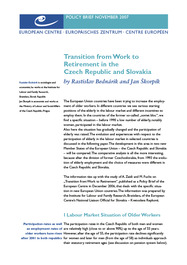