Transition from Work to Retirement in EU25

This policy brief had been produced for the European Commission (DG Employment, Social Affairs and Equal Opportunities) within the project 'European observatory on social situation'. It draws upon the empirical evidence from the EU Labour Force Survey, by analysing differences and similarities across the EU25 with respect to the labour force participation among older workers. It also sets out the policy implications by arguing that the policy agenda that needs to be followed is one of "flexible later retirement". To achieve this, there is a need for additional incentives in the system to enable people not just to move between jobs in later working life but also to work part-time without losing their entitlement to benefit. Such policy incentives should encourage older workers to avoid the phenomenon of a "cliff-edge" fall from full-time work directly into retirement that many of them often face. 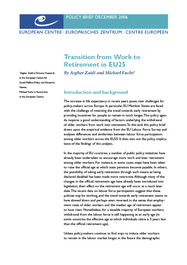 Transition from Work to Retirement in EU25