The dilemmas facing the European Union countries associated with population ageing have until recently been articulated in two ways:

The concept of social sustainability, though less clearly defined, encompasses both these challenges while addressing also the awareness of the need to ensure intergenerational solidarity in countries experiencing the demographic transition. In such ageing societies, the notion of social sustainability requires the enabling of practical, mutually beneficial and satisfying relationships between generations.

This Policy Brief addresses these inter-generation policy challenges and appraises the progress made so far within international policy frameworks (from UN and the European Commission) while also reporting on the opinions of European citizens on the challenges of intergenerational solidarity. The results are drawn from the Flash Eurobarometer survey of 2009, conducted by the GALLUP organisation, sponsored by the European Commission.

There is no shortage of mention of intergenerational solidarity in UN policy frameworks, starting from Copenhagen (1995) for the International Year of Older People (IYOP), through to Madrid (2002) for Madrid International Plan of Action on Ageing (MIPAA), to Berlin (2002) for Regional Implementation Strategy (RIS), and in León (2007) for a review of the MIPAA/RIS, and also in multiple communications from the European Commission as well as Lisbon Treaty (2009).

More details on the Spanish EU Presidency event can be found here. 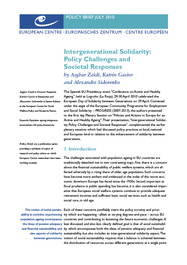