Poverty among migrants in Europe

The policy brief analyses the level of poverty among migrants in 14 European countries. Migrants from outside the European Union are occasionally exposed to a multiple times higher risk of poverty than the 'indigenous' population. EU and non-EU migrants constitute two rather distinct groups in most countries in terms of their exposure to poverty. The results were confirmed using various tests of reliability, including the estimation of confidence intervals for the poverty estimates, and the use of alternative definitions of migrants. 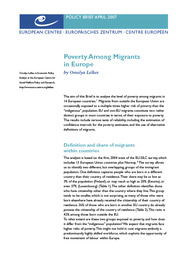 PB Poverty Among Migrants in Europe