Housing problems and access to basic local services in the EU27

How does Austria compare?

The aim of this Brief is to explore (i) housing problems, such as poor housing quality, overcrowdedness, housing cost overburden, and (ii) access to basic local services, including public transport, postal and banking services across the EU27. We also assess whether the population at risk of poverty is exposed to cumulative disadvantage, suffering from both low incomes and housing deprivation. We complete the analysis with a focus on specific social groups in Austria and overall EU27.

In 2009, an estimated 30 million people, 6% of the EU27 population, suffered from severe housing deprivation and 18% lived in overcrowded conditions. Results suggest a major geographical divide across Europe with the highest rates in Eastern European countries.

The population at risk of poverty is likely to suffer from relative disadvantage in national terms in all EU countries with respect to housing cost overburden, overcrowded dwelling and severe housing deprivation, with the largest relative gap in case of the former indicator. In the majority of countries, this relative disadvantage prevails with regard to access to basic local services.

The focus on social groups provides interesting insights into differences within a country. In Austria, migrants from outside the EU face the highest prevalence of severe housing deprivation, with a rate of 16%. Large families, single parents, and those at risk of poverty have an above average exposure to housing deprivation. The elderly living in rural areas have the most severe problem with access to public transport and access to postal and banking services. 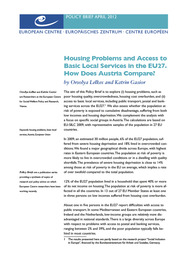 Housing Problems and Access to Basic Local Services in the EU27.