The Social dimension: Opportunities and limits to benchmarking for a Social Europe

The European Commission had launched several initiatives to strengthen the social dimension that culminated in the proclamation of the European Pillar of Social Rights on 17 November 2017. In response to challenges with regard to poverty and social exclusion, the Commission aims to encouraging general benchmarking to enhance the identification with the envisaged structural reforms in the Member States and to promote their implementation.

The Austrian Federal Ministry of Labour, Social Affairs and Consumer Protection therefore commissioned the European Centre for Social Welfare Policy and Research to identify key thematic areas for potential benchmarking processes in the social field during the next potential upward policy convergence. The study (Scoppetta et al., 2017) set out to discuss the pros and cons of the benchmarking process in the social dimension, its benchmarks and corresponding social indicators, in particular by focusing on minimum income schemes as a case for a benchmarking exercise suggested by the European Commission.

This Policy Brief synthesizes the results showing that benchmarking in the social field has its pitfalls when focusing on a purely quantitative target setting, and thus can only be recommended within limits in the social dimension. 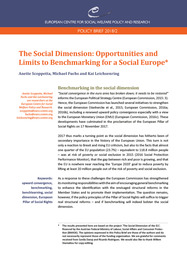 PB The Social Dimension: Opportunities and Limits to Benchmarking for a Social Europe