The Policy Brief aims to provide an overview of housing deficiencies in EU Member States and to examine the extent to which they are linked to low income. Housing is a key aspect of poverty and social exclusion.The quality of housing has an impact on, for instance, social relations and access to employment. Poor housing quality is also a major element of deprivation and when coupled with income poverty, it reinforces social disadvantage. Despite this, there are few empirical studies that focus solely on housing quality while also highlighting its link to income.

The analysis is based on data from the 2012 and 2007 EU-SILC ad-hoc modules on housing conditions. The results suggest that housing conditions are correlated with a country’s affluence and that there is a marked East-West divide in respect of many of the indicators used to denote housing deficiencies. Some Eastern European EU countries, such as the Baltic States, Bulgaria, Romania and Hungary appear to be particularly disadvantaged. This is most visible with respect to basic amenities (i.e. lack of bath, shower, indoor toilet) and to adequate plumbing installations.
Comparing results between 2007 and 2012 shows that there was an overall improvement in housing conditions in several nations, including those countries where the scale of problems was relatively large. Overcrowding has declined in the majority of countries both in terms of the objective and subjective indicators. The extent of housing dissatisfaction also decreased in 23 of the 28 EU countries with exceptions including Greece and Spain (two countries which have been particularly hardly hit by the recent economic crisis).
Those at risk of poverty tend to live in worse housing conditions in most countries and are also more likely to be exposed to multiple housing deficiencies. This is particularly the case in Romania, where more than 60% of those at risk of poverty report the lack of three of the four basic amenities or the lack of adequate installations.
Besides presenting empirical results, the Policy Brief also highlights potential problems with the indicator on shortage of space in the dwelling, concerning measurement, cultural factors and aspects of adaptation as well as environmental concerns. 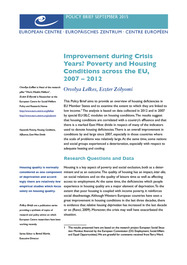 Policy brief: Improvement during crisis years? Poverty and housing conditions across the EU