Beyond the 'guest worker' agreement

Portability of pensions and health insurance for pensioners in the migration corridors Austria/Germany vs. Turkey

With the increase of international integration in Europe and beyond, the number of persons who acquire pension insurance periods in more than one country is on the rise. Thus, the portability of social benefits becomes an increasing concern for individuals and policy-makers. Portability is defined as the ability to preserve, maintain and transfer vested social security rights, independent of nationality and country of residence.

The present Policy brief looks at the portability of pensions and health insurance for pensioners in the migration corridors Austria/Germany vs. Turkey and focuses on the situation in Austria and Germany. The bilateral social security agreement between Germany and Turkey was already concluded in 1964, between Austria and Turkey in 1966. They represent typical recruitment agreements with a broad objective area of application incl. health insurance.

The average pension paid to Turkish citizens is clearly below the average of all Austrian (German) pensions paid. Especially for Turkish women, the combination of low wages (often with reduced working hours) and rather short insurance biographies leads to low old-age pensions.

The quality criteria of portability regulations, namely individual fairness for individuals, fiscal fairness for host and home countries and bureaucratic effectiveness, are more or less fulfilled in the migration corridors Austria/Germany vs. Turkey. Compared to the respective decrees of the European Union, which represent the most extensive regulations on the multilateral level, and other bilateral agreements concluded by Austria and Germany, there are only minor differences in the bilateral agreements with Turkey. 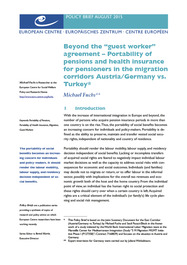