A snapshot of intergenerational justice

In this Policy Brief  Pieter Vanhuysse presents a simple four-dimensional snapshot indicator of intergenerational justice (IJI) in practice for Austria and 28 other OECD countries. Three of the IJI dimensions measure policy outcomes that leave legacy burdens towards younger and future generations: the ecological footprint created by all generations alive today; early-life starting conditions as measured by child poverty levels; and the public debt burdens on the shoulders of currently young generations. A fourth dimension presents a measure of welfare states’ overall pro-elderly bias in social spending.

Austria ranks tenth-worst on both ecological footprints and public debt per child, but sixth-best in terms of child poverty. The Austrian welfare state has the ninth-highest pro-elderly spedning ratio in the OECD: it spends more than five and a half times as much on every elderly as on every non-elderly Austrian. These four dimensions are then aggregated into an overall IJI value, using a ‘benefit-of-the-doubt’ weighting method to respect the (revealed) preferences of democratically elected governments. Overall, among the most intergenerationally just OECD countries were Estonia, South Korea, New Zealand and all of Nordic Europe. By contrast, among the least intergenerationally just countries were the USA, Japan, Italy, Greece and Canada. 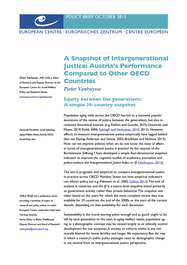 A Snapshot of Intergenerational Justice