This Policy Brief provides the latest evidence on how EU countries differ in terms of poverty risks for older people (aged 65 years and over).

Results using the latest EU-SILC data for 2008 show that, on average, older people face a higher poverty risk rate than the total population: the rate for older people was 19% as opposed to rate for the total population of 17%. The highest poverty risk rates were observed in Latvia (51%), Cyprus (49%), Estonia (39%) and Bulgaria (34%), and the lowest in Hungary (4%), Luxembourg (5%) and the Czech Republic (7%).

In general, countries with low poverty risk rates for older people have a good social safety net in the form of a basic pension (e.g. the Netherlands) and/or they offer strong redistribution in the earnings-related contributory pension schemes in the form of minimum guaranteed pensions (e.g. Austria).

A broader picture is provided by the material deprivation rate, which measure deprivation in more absolute terms. On average, 16% of older population in EU27 could be considered materially deprived during 2008, and only about one third of the income poor were also disadvantaged by material deprivation. Thus, out of 16 million older people identified as at risk of poor, only about 5 million were also materially deprived.

Not surprisingly, there are wide variations across countries with respect to the proportion of those who are materially deprived and also face the risk of monetary poverty. The highest levels were registered in Bulgaria (73%), Romania (57%), and Latvia (50%), and the lowest in Luxembourg, the Netherlands, Sweden and the UK (all, less than 10%).

A subsequent Policy brief will provide a glimpse into the future by analysing the impact of pension reforms. 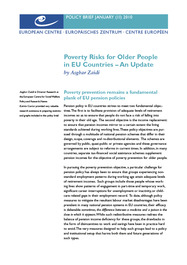