Since few years alcohol consumption of youth is again discussed vigorously and controversially in the European public. On the one hand the discussion starts with the assumption that the drinking habits of young people have become more excessive and on the other hand the changed beverage preferences (keyword: alcopops) are addressed as well as the new consumption contexts (keyword: public places in urban centres, such as the Rudolfskai in Salzburg and the Rudolfsplatz in Vienna). Many media scandalize the changes in adolescent drinking whereas the changes in the drinking habits of adults are being neglected.

Based on epidemiological results an uniform increase in adolescent drinking and intoxication in European countries cannot be proven. For Austria it is to be assumed that alcohol consumption of young people has stagnated during the last decades if indeed it even has declined as with adults and that it clearly is below that of the latter. However, the beginning of alcohol consumption might well start a year earlier than two decades ago and consumption by girls has approached that of boys of the same age, though they didn't equal them. Based on representative studies also no increase in intoxication among adolescents can be proven even though the data also indicate here the convergence of genders and do not capture changes in subgroups. Hence, the changed drinking habits of adolescents are only little reflected in quantitative surveys.

The resent study approaches the changed drinking habits of young people with qualitative methods. It was carried out in an metropolitan area - in Vienna - and in an provincial and rural area - in Lower Austria - , which as East-Austrian wine-growing states show a comparable drinking culture. The conspicuous consumption by young people in groups, which are described here as "juvenile alcohol scenes", is at the focus of attention. 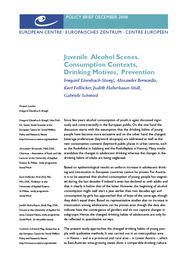