Exclusion from material resources among older people in EU countries

The salient features of the current European economic climate are not easy to view with optimism: an uncertain recovery from recession, uncomfortably high levels of unemployment, Eurozone debt crises and the longer-term challenges of population ageing and sustainability of social welfare systems - all make for hard reading. Yet, our age may need the optimism and industry of the Dickensian character Wilkins Micawber, a man from the literature of another age, but who was ultimately able to gain the reward he aspired.

Glaring parallels illuminate the poverty of 1850s Victorian England and the current EU polity. As the 2008 recession abates, most European economies are returning - uncertainly - to positive growth. EU unemployment rates average at 10%, common currency problems are testing community solidarity while budgetary cutbacks initiated in many member States are impacting strongly on the public benefits and services for vulnerable groups (particularly, children and older people and people with disabilities). The impact on future generations of elderly - cohorts which are growing in number just as the working populations supporting them declines - depends to a large part on how current problems are resolved at country, regional and European level.

This Policy Brief examines the picture for the current generation of older people, with particular reference to their exclusion from material resources, an absence which triggers and identifies other forms of exclusions for older people. Income is used as a primary measure of exclusion (following Atkinson), but Sen's ideas, emphasising agency freedom and capability aspects of welfare, are also adopted. What emerges is a degree of variation in the relative ranking of countries according to which of the two measures is adopted. The capability approach measures alter significantly the relative ranking of EU countries when compared with the income-based measure. Eastern European EU countries fare much worse in terms of capability deprivation of older people, while the Western European countries improve in their relative standing. What emerges is the clear methodological implication that income-based measures provide only an incomplete picture and must be complemented with non-monetary measures (such as capability deprivation measures reported in this Brief) for a more satisfactory snapshot of the material conditions of older Europeans. 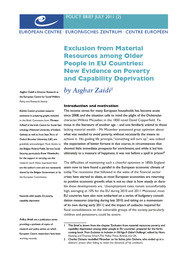