Subjective perspectives of two different groups of persons involved, the so-called "internal views", allowed to investigate the perception of drug policy. They were firstly based on interviews with professionals from the areas of administration, treatment and care, prevention, justice and the penal system, who were in the period of investigation active in implementing Viennese drug policy (43 interviews). The second group of interviewees included the "addressees" of drug policy: drug users with different experiences with drug control and treatment and relatives of drug users (46 interviews).

The study draws the success story of a regional drug policy that is based on the organisational combination of the drug-related activities of the city ("cross-sectional policy") and the professionalisation of the drug services, with the aim of social reintegration. In recent years, the limitations of Viennese drug policy have become more obvious. On the one hand, the municipality lacks influence on the design and implementation of national drug policy and has not the authority to define the mandates and ranges of activities of drug policy organisations at this level. On the other hand, poverty, unemployment, and lack of education are policy areas that determine the drug situation but which hardly can be influenced by the local drug policy only. It would therefore be desirable that policy-makers at national and supranational levels would consider a more "holistic" approach to drug policy. Furthermore, the fact that drug problems should be considered as part of major and more basic social problems should be kept in mind. 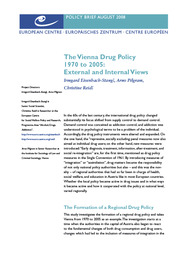 PB The Vienna Drug Policy 1970 to 2005: External and Internal Views