In a European comparison Austria shows above-average levels of both taxation and social expenditures. The analyses carried out show that the high levels of taxation and social expenditures not only result in a redistribution from the left- into the right-hand pocket of residents but also that the vertical redistribution from the top to the bottom income groups through social insurance contributions, income taxes and monetary social benefits in sum reaches a sizeable dimension.

The results are part of a completed research project funded by the "Jubiläumsfonds" of the Austrian National Bank (project no. 11294). For the analyses, we used the European Tax/Benefit Micro-simulation Model EUROMOD with EU-SILC 2004 (provided by Statistics Austria) as input data. 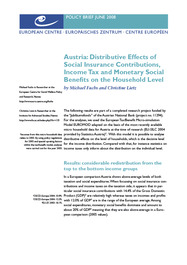