Whereas the number of new HIV-infections has remained relatively stable, infections with other sexually transmitted diseases such as hepatitis, syphilis and gonorrhoea are lately on the increase in Austria. Regarding the number of teenage pregnancies, Austria has an average rate compared to other OECD countries. Health promotion and prevention in the area of sexual and reproductive health is mainly directed towards youth in order to provide them in time with the appropriate knowledge and behaviour patterns to protect themselves against sexually transmitted diseases and unwanted parenthood.

However, research evidence shows that the conventional offers in this area often do not or insuffciently reach young boys and young persons from social classes with education deficits, despite the fact that they are more likely to engage in risky sexual behaviour.

A study conducted by the European Centre in 2006/2007 using interviews with experts and male youth shows the challenges posed in the work with boys, their experiences with sex education,their respective information demands as well as how they may be best addressed by relevant offers. An important result of the study is that socially disadvantaged youth as well as migrants have sexual contacts at an earlier stage than other youth but provide of fewer information resources. Hence, for these youth gender-and culture-specific offers should be increased. 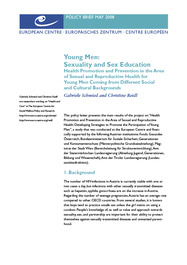