This Policy brief examines the interrelated aspects of the fiscal and economic policy as well as the impact of population ageing on the sustainability of public finances in the wake of the recent economic crisis.

The countries covered are the Central and Eastern European Countries of the EU: Bulgaria and Romania; the Baltic States of Estonia, Latvia and Lithuania; and the so-called Visegrád Four - the Czech Republic, Hungary, Poland and Slovakia. These CEE countries experienced an impressive economic growth around 2006, matched by a similarly impressive contraction during the crisis in 2009. The governments were proactive in adopting an expansionary fiscal policy, and observed a successful recovery during 2010. During the same times, it also became clear how mounting government debts can lead a country to the brink of insolvency. This is a genuine concern for the CEE countries especially for the fact that these relatively young market economies are still learning to deal with the global economic fluctuations. They have sided with the austerity-now arguments and have therefore embarked on various measures to cut the budget deficit and reduce public debt. Such a choice is partly driven by the IMF and the EU conditions so as to raise market confidence on public governance, but also due to CEE countries' own ambitions to deal with their structural problems and to be fit to join the Eurozone.

What further accentuates the challenges of the sustainability of public finances is the prospect of rapidly ageing populations, caused by a combination of longevity gains, falling fertility and emigration. The sustainability gap indicator of the European Commission shows that the demographic transition will have a significant impact on public finances of many CEE states, particularly in Romania, the Czech Republic, Slovakia and Lithuania.

The next few years will undoubtedly be a crucial time as CEE governments look for a mix of proactive economic and social policies which not only strengthen their recovery from the crisis, but also improve public finances to steer clear of dangers of national insolvency and avoid the damage to future generations. The question is not whether to consolidate or not, but its timing and also how to limit the size of the welfare state without compromising its social objectives. For example, the reforms introduced reduce public pension spending and improve public finances, but these entrenchments raise concerns about a greater risk of poverty among future retirees. Achieving the delicate balance between current and future economic and social policy issues as well as between the future financial and social sustainability issues requires not only the political will to make tough policy decisions, but also the ability to persuade the public to make sacrifices to ensure long-term sustainability of public welfare system. 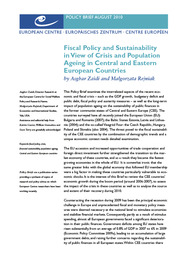