The challenges of fiscal sustainability that EU Member States face are well documented, and the focus is justifiably on addressing them. But, the impact of policy reforms now on the future for pension systems and incomes of future retirees is less clearly articulated: this Policy Brief has explored this issue of pension sustainability in EU countries. Equally, the need for sustained policy remedies to the current economic crises is widely recognised. Yet, this acceptance has masked the relationship between the action taken now and the extent and nature of fiscal and social challenges arising in the future: this Brief raises the awareness for policymakers of impacts of decisions on policy issues upon the pension structures and income arrangements for future pensioners.

As an essential context, this Brief examines the financial sustainability of public finances in EU states. This is followed by a forward glimpse at the likely evolution of pension incomes in these countries, using projections made available by the European Commission during 2009. It also examines how the pension reform responses to financial sustainability challenges have influenced the reshaping of pension systems into a variety of systems that are less redistributive in some cases and more socially protective in others. These impact-of-pension-reforms results are derived from the OECD simulations of pension income entitlements for future retirees. This briefing follows on from an earlier Policy Brief “Poverty Risks for Older People in EU Countries – An Update”, which stratified EU countries according to the poverty risks faced by its older populations (aged 65 or more) in 2008.

The next few years will undoubtedly be a crucial time as EU national governments look for the ‘magic formula’ in the shape of proactive economic and social policies which not only strengthen their recovery from the crisis, but also help them stay clear of dangers of national insolvency and avoid the damage to future generations that would be a failure to attend to issues of pension sustainability. Achieving this delicate balance requires not only the political will to make tough policy decisions, but also the ability to persuade the public that its own interest requires it to make some current sacrifice to ensure sustainability of pension systems. What has become clear is the need for continued high-quality and independent evidence base to address both current and future fiscal and social issues: the better the evidence, the easier it becomes to formulate policy responses and persuade the public about the need for, and the consequences of change. 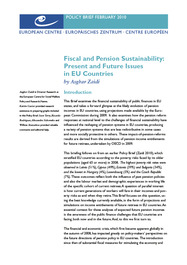