Russian versus European welfare attitudes: Evidence from Round 8 of the European Social Survey

Public attitudes to welfare, climate change and energy in the EU and Russia (PAWCER)

Europe and Russia have a long common history. Over time, a great number of different nations have evolved and dissolved in these regions, each developing their own cultural backgrounds, institutions and values. The relations between Russia and Europe, or European countries, have not been without conflicts stemming from various cultural (e.g., different attitudes and values) and structural (e.g., competition for resources) differences. Such sources of conflict can also interact.

However, roads to peace can arise and be developed from cultural and structural sources as well. Hence, in order to understand past and present conflicts–as well as to find ways to build a shared identity and foster mutual understanding in order to prevent potential future conflicts–among other things knowledge about public opinion in the different nations is important. In this regard, comparative studies of welfare attitudes in Russia and Europe can make a valuable contribution to mutual understanding.

Drawing on data from the eighth round of the ESS, fielded in 2016/17, the report presents welfare attitudes in Russia and Europe, thus facilitating their comparison. It covers two main topics: public support for proposed changes to social protection systems, and public support for current social policies targeted at specific vulnerable groups. The latter includes income redistribution and the poor, unemployment benefits and the unemployed, public pensions and the elderly, childcare and working parents, and the accessibility to social rights for migrants. 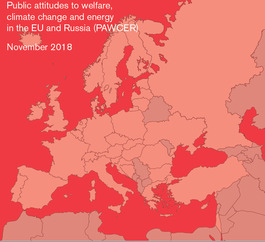 Russian versus European welfare attitudes: Evidence from round 8 of the European Social Survey