To compare various countries experiences with irregular migration, the European Centre for Social Welfare Policy and Research coorganized an International Expert Meeting on the initiative of and in cooperation with the Israeli Ministry of Labour and Social Affairs.

The conference, entitled "Irregular Migration: Dynamics, Impact, Policy Options", took place in Jerusalem from the 29th of August to the 2nd of September 1999 and brought together researchers, government officials, and representatives of NGOs, international organizations and migrants organizations from Israel, Europe and North America.

The present volume collects the papers presented at this meeting. Part I contains six papers presented in the first session of the meeting, which was devoted to the situation of irregularly resident migrants in receiving countries. In her paper, Joanne van der Leun presents findings of a research project on undocumented migrants in the Netherlands.

Mamadou Diouck focuses on the situation of migrants in an irregular situation in France from the point of view of an activist for the "Sans-Papiers" movement.

Two papers give an insight into the problems associated with the presence of undocumented foreign workers in Israel- a country for which the inflow of non-Jewish migrants is only a very recent phenomenon:

In part II, three papers focus on the consequences of irregular migration for the host countries.

The general theme of part III is how to deal with irregular migration politically.

The list of papers in part IV is closed with a summary of the principal conclusions of an OECD-seminar on "Preventing and Combating the Employment of Foreigners in an Irregular Situation", which was held in The Hague in April 1999.

The volume is rounded out with short reports of the discussions following the presentations in each session, a report of the on-site visits in Tel Aviv organized for the experts on the third day of the conference (part III) and a summary of the meeting, which was prepared by Marvin Ishai on behalf of the co-organizing Israeli Ministry of Labour and Social Affairs (part V). 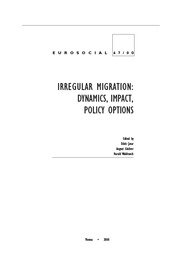