Dimensions of poverty in Austria in the late 1990s

This paper provides an extensive analysis of income and consistent poverty in Austria in the late 1990s. Although citizens in Austria are less in danger of poverty than their counterparts in most other European and OECD countries, poverty is by no means a marginal phenomenon in Austria. A fifth of the population is in a situation of financial distress at least once over a period of four years, and some 3% can be considered to be long-term income poor. On average, some 11-13% of Austrians experience income poverty and, among them, some 4-5% consistent poverty during a year in the late 1990s. Single parents without employment, the long-term unemployed, non-EU citizens, persons of working age living in jobless households and - although to a lesser intensity - single pensioners face the highest poverty risks. Poverty rates for those groups increased relative to the entire population over the years. In general, public social transfers appeared to be an effective tool not only for reducing levels and intensity of poverty but also for shortening stays in poverty, and a slight move towards greater targeting of those transfers seems to have happened between the mid- and the late 1990s in Austria. However, especially in view of certain groups at risk insufficiently covered and protected, well-designed and coherent policy measures are necessary to combat the phenomenon of poverty in Austria and to guarantee social inclusion for all citizens. 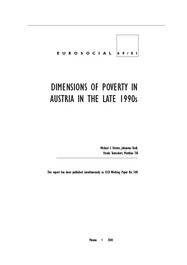 Dimensions of Poverty in Austria in the Late 1990s